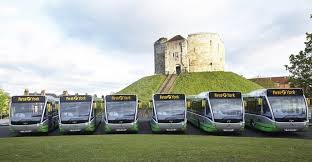 Zero Carbon Yorkshire’s Transport Group has been reformed, to help ZCY pursue the decarbonisation of transport in Yorkshire.

In 2020 it has chosen to work in two areas – on the decarbonisation of rail and ‘active travel’. It aims to hold four meetings or events during the year.

The Group aims to influence sub regional bodies and new mayors (e.g. in West Yorkshire and Sheffield City Region), and local authorities to adopt ambitious strategies on emissions reduction and to monitor progress. Members have also supported the work of the Transport Activists Roundtable (TAR) in challenging the decarbonisation strategies of Transport for the North and the Department for Transport.

What are the solutions on transport?

Despite the lack of progress on both climate change and air quality, there are solutions out there. Some of these are being introduced in Yorkshire and the Zero Carbon Yorkshire Transport Group wants to work with partners to accelerate their roll-out.

The key solutions are:

In 2016, transport became the UK’s biggest source of greenhouse gas emissions making up 26% of total emissions. There has been little progress on reducing this (only a 2% fall since 1990 v. a 57% decrease in energy supply emissions). Worse, pre-pandemic, it had started to grow again. There was then a massive initial drop during the Lockdown, but it is now well up again, apart from at commuting times where increased home working continues to depress travel.

Throw in the additional emissions from an ever-expanding aviation sector and you have a compelling case why we must tackle transport in Yorkshire if we are to achieve our climate targets.

In January 2018, the Committee for Climate Change confirmed its recommendation that transport emissions be reduced by 44% from current levels by 2030.

In April 2018, Transport for the North (TfN) became England’s first sub-national transport body. Its Strategic Transport Plan will carry statutory weight in determining investment decisions (e.g. for new road schemes) but it falls woefully short of what’s required to tackle climate change. Sharp lobbying by transport activists has however pushed TfN into agreeing to produce a decarbonisation strategy, which we await.

In Summer and Autumn 2018, Transport for the North consulted on two Strategic Development Corridors, the Southern Pennines and Yorkshire to Scotland. Zero Carbon Yorkshire’s Transport Group will continue to look at these to ensure they deliver on carbon reduction and air quality.

The new Government (from 2019) was also committed to introducing some important initiatives around active travel and public transport. £5bn of potential funding was announced in the pre-pandemic period.

Active Travel England is being created to oversee the Government’s £2Bn cycling and walking investment (https://cyclingindustry.news/active-travel-england-created-to-oversee-uk-govs-2bn-cycling-and-walking-investment/). The Government also published “Gear Change” – described as a bold new vision for cycling and walking (https://www.gov.uk/government/publications/cycling-and-walking-plan-for-england) along with new guidance on cycle facilities design (https://www.gov.uk/government/publications/cycle-infrastructure-design-ltn-120 ), and councils were given new funds to introduce pop-up measures during the pandemic – though there has been some rowing back given motorist reaction.

ZCY is campaigning for a comprehensive rolling programme of rail electrification, which has recently been confirmed as Network Rail’s ambition. An early objective is to secure prioritisation for the full electrification of the York to Manchester route (Trans Pennine), and to complete the electrification  of the Midland Main Line north from Market Harborough, both of which have been promised by successive governments and then postponed. These are both projects that should deliver, if funding is earmarked now, in the 2020s. The TWG has worked with other campaigners to ensure there is a focus on
decarbonisation and on the more immediate investment requirements of our
regional network.

Public Transport The Key Role of the Bus

Bus operators have led the way in decarbonising road transport and over the last five years have invested £2 billion in new cleaner and greener buses resulting in our cleanest ever bus fleet. Unprecedented falls in passenger revenues have recently created a need for government investment to ensure essential services can continue to run. This fall in revenue has meant operators have reduced or cancelled orders for new buses. This has placed 10,000 UK manufacturing and apprenticeship opportunities at risk. The key role of the bus in decarbonising transport requires new funding models to help to preserve these jobs.

Our aim must be to ensure patronage returns to pre-Covid levels. To ensure its model share increases, fares need to be supported so they are affordable and free bus passes for specific sectors are maintained. Use of technology for efficient payments and inter-operability with rail for demand responsive services are a key priority.

The Future of Travel

Integrating modes of transport to create more seamless journeys, where all mobility elements work together rather than compete with each other, is a recognised holy grail of users and operators.

Integration comprises co-location where the “cheek-to-cheek” interchange facilitates integration and frees-up space for other uses. Examples include shared cars and bikes at bus stops and rail stations; and mobility hubs that design co-mobility into streetscapes. It also comprises ticketing that allows whole-journey door-to-door trips, or smart ticketing (such as the West Yorkshire Metro Mcard). Finally it relies on information and marketing that alerts people to possibilities for linking modes.

During 2018 and early 2019, the Government started developing its Aviation Strategy with one of its core objectives being to “Support Growth while tackling environmental impacts”.

Forecasts from the region’s airports predict passenger numbers rising from their current level of 4.8 million per year to nearly 11 million by 2030 – well in excess of the Committee for Climate Change’s recommended limit on growth of 45%. The decision by Leeds City Council’s Planning Committee to approve expansion plans submitted by Leeds Bradford Airport are a considerable setback in achieving NetZero by 2038.

Many areas of the UK, including towns and cities in Yorkshire have failed to comply with legal limits on air pollution since they were introduced in 2010.  A number of charging clean air zones (CAZs) have been proposed, intended to finally end this situation, under pressure from the Government (following Client Earth’s successful court cases against the Government). Many of these proposals are on hold due to changes in travel patterns during
the lockdown but in the case of Leeds City Council all the plans for a CAZ have been abandoned. What happens next is as unclear as ever but new consultations are expected in due course in areas where pollution is rising back again and still high.