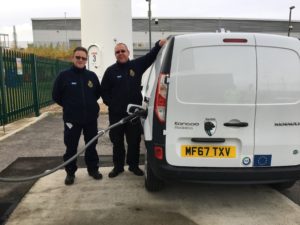 It is the first ambulance service in the country to introduce the support vehicles and has set itself the challenge of making the entire fleet as eco-friendly as possible over the next few years.

The vans, which do not produce any emissions, are powered by an electric motor using energy from both the battery and a hydrogen fuel cell. The battery recharges from a power supply and the hydrogen can be replenished at a refuelling station.

In addition to this, a vehicle from the non-emergency Patient Transport Service has been converted to run on both diesel and hydrogen. The harmful emissions from a conventional diesel engine can be reduced by up to 70% through a hydrogen injection system.

Meanwhile, YAS is working with low emission technology company ULEMCo to build a prototype hydrogen-electric ambulance which will have zero emissions.

YAS has already introduced several other projects to reduce its carbon footprint, which include installing solar panels on more than 100 ambulances to keep their batteries charged. It has also won several national awards for its environmental initiatives.

Alexis Percival, Environmental and Sustainability Manager at Yorkshire Ambulance Service, said: “We are so excited to be the first ambulance service in the country, possibly the world, to have three hydrogen vehicles in our fleet. We are looking to expand our zero emission fleet, as more Clean Air Zones come in across the county. We also see the health benefits of cleaner air, as well as reducing our impact on climate change through the essential work that we carry out.”